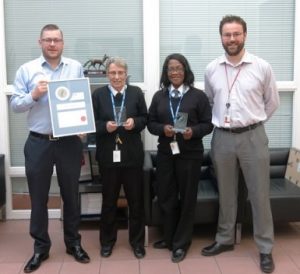 The Silver Fox Audit team have completed regular monthly audits throughout 2016 to four IPSL premises in Northampton, Milton Keynes, Bradford and Camberley. These announced audits have been carried out at various times testing both day and night shift Security Officers from Churchill Security Solutions and IPSL’s own staff.

On 24th January 2017, Lynda Moore from FM Contract Watch presented the 2016 Silver Fox Certificate to the Security team at IPSL Northampton. Silver Fox certificates were also awarded to the other 3 sites.

In addition, individual Silver Fox awards were made to Security Officers who had been especially vigilant and prevented unauthorised access to the premises. Lynda Tarplee and Pearline Morgan were presented with their awards in Northampton and Vincent Gah and Mends Afrifa also received awards for their work in Milton Keynes.

We congratulate all of the Security Officers and staff members who prevented our auditors gaining unauthorised access and look forward to continuing to test them during 2017.