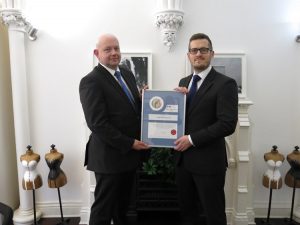 The Silver Fox Audit Scheme, a division of FM Contract Watch, carries out independent audits to test security guarding teams throughout the UK.

The audit highlights areas where there are shortfalls in security and improvements can be made, but it also rewards good results and on Tuesday, 19th January, Lynda Moore, Partner of FM Contract Watch, presented the prestigious Silver Fox 2016 Certificate to the Graff Diamonds Security Team.

Scott Mitchell, Security Lead Officer, and Michael Wright, Global Control Room Co-ordinator received the award on behalf of the in house security team and they were congratulated on their excellent results throughout the year. During 2016 the Silver Fox Auditors carried out numerous scenarios to test the security team including standard penetration audits, customer service, covert surveillance and telephone audits. When faced with an Auditor the Graff Security Officers have always risen to the challenge and provided the required response.
L – R Michael Wright and Scott Mitchell